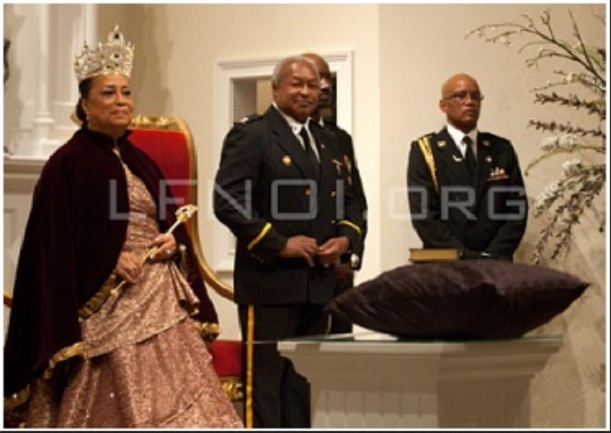 We, Afrodescendants (so-called African-Americans), have been identified by the majority population as Negroes, Coloreds, and African-Americans, among other names. We are unlike other people of African descent, living today in different parts of the world, whose ancestors were not subjected to slavery. They know their identity: they still have their mother tongue, culture, religion, and tribal kinship. We, Afrodescendants, do not. Other people of African descent can enjoy the protection and assistance of their national authorities, if they so choose. But we, Afrodescendants, cannot. We are rendered a stateless people by the deprivation of these most precious human rights – the right to our mother tongue, culture and religion. We have only the UN to look to in hopes of protection. The UN is the designer of human rights. Is not the UN the protector of us?

We want restoration: Afrodescendants must be rejoined to the human families of the earth – families such as the Chinese, the Italians, and so on. We have been claimed by the countries in which we live and forced to live under them as 2nd class citizens. We know that we, Afrodescendants, are a unique nation of people unto ourselves. Our histories, our having been transported from Africa for the purpose of enslavement, our suffering the living lingering effects of plantation slavery – these things bond us together as a nation of people.

All the wise scientists, and you, in your hearts, will bear witness that we, Afrodescendants, are an ancient people who descended from Abraham. We were scattered through slavery, as was prophesied in the Bible, Geneses 15:13. We were stripped of our original identity, mother tongue, culture and religion. Today, still, we are denied these precious human rights that other nations enjoy. What can be done about our loss except the payment of reparations?

We have worked toward the goal of recognition and reparations for fifteen (15) years in the UN and international community. In the year 1997, the UN Sub-Commission gave the Working Group on Minorities a mandate to examine the lingering effects of plantation slavery upon us. The UN Working Group on Minorities soon recognized that we have begun rejoining onto ourselves and our original cultures through the process of Ethnogenesis, and they officially acknowledged our self-chosen identity – Afrodescendants.

We call upon all bodies of the UN to recognize us. And we call upon all so-called African-Americans to do the right thing. Let us recognize ourselves: we are Afrodescendants, member of the human families – the peoples and nations of the earth. Our time is here, now.

If you’d like more information about how you as an Afrodescendant can become a part of the Afrodescendant population rejoining the human families, the peoples and civilized nations of the earth, click here.

Lost-Found Nation of Islam Training: Understanding And Making Exodus From the Old World of Confusion