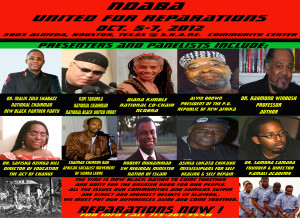 Ndaba 2012 United for Reparations is a multi-organizational event that seeks to provide Afrodescendants (slave descendants of the Transatlantic Slave Trade) an inclusive process for achieving reparations, and for understanding the economic, political, spiritual and cultural atrocities of the Transatlantic Slave Trade.
Al-Ghani, Hasan and Umrani, of the Lost-Found Nation of Islam-Houston, will speak about the past, present and future implications of identifying with the term, “Afrodescendant”, a United Nations-designated term which identifies descendants of the Transatlantic Slave Trade.
The significance of Ndaba 2012 United for Reparations is to bring leaders of various segments of the so-called African American community together to seek reparations, as well as to expand enjoyment of freedom, justice and equality for Afrodescendants globally.
The Lost-Found Nation of Islam-Houston is under the leadership of the Honorable Silis Muhammad. Mr. Muhammad is also CEO of All for Reparations & Emancipation (AFRE), a nongovernmental organization in consultative status with the United Nations–which successfully spearheaded efforts to obtain human rights recognition for so-called African Americans with the term “Afrodescendants”.
For more information, contact us, or to get a schedule of events planned, call Krystal at 713-261-3558.

BLACK FAMILY: A Government of Our Own Enables Us To Improve Our Quality of Life

BLACK INDEPENDENCE: Lost-Found Nation of Islam Unveiled the Government of the Afrodescendant Nation